1. Linen and wool were the most commonly used fabrics. Silk was used for more expensive garments. Cotton was used more than once thought, however, it was somewhat more costly and less available than linen and wool. Fustian, a blend of linen and cotton was popular. Another popular fabric was linsey-woolsey, a woven fabric with a linen warp and woolen weft. Be careful with printed fabrics. Unless you are experienced with 18th century prints, check with someone in the group who is experienced before buying. Stripes, checks, and plaids were used for some items of clothing. They must be a woven fabric and not printed.

2. Your clothing reflects your station and occupation in life. Read first person accounts such as travel diaries and letters for details. For the most part, if you were in the Virginia capital or Charlestown, you would see finer clothing than would be seen in the Carolina Backcountry. A working person would be dressed plainer than a merchant or prosperous farmer. Your dress should be consistent with your interpretation. Ask veteran members for suggestions.

3. SHIFT- Fabrics-should be white linen. Cotton can be used if necessary, but linen is more comfortable and breathes better. Shift sleeves should end just below the elbow.

4. PETTICOAT- Fabrics- linen, wool, cotton (but heavier than quilter’s cotton), silk or a linen/cotton blend, or linsey-woolsey. Stripes and solids are good, but avoid checks and plaids. Unless you are knowledgeable about correct prints, check first before you spend any money, or just but a small swatch of fabric for a sample. A pleated waist is much more appropriate and more comfortable than a gathered waist. 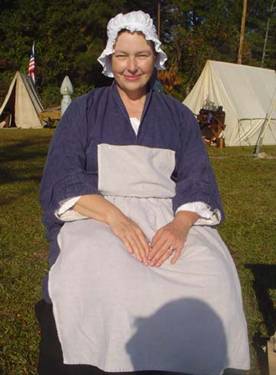 5. SHORTGOWN- Fabrics- same as for petticoat. There is no documentation for plaid or checked shortgowns. Small vining prints are good, but it is better to check before you buy. Shortgowns are working garments. There are differences of opinion as to whether these are appropriate garments for us. A much better working garment is a bed jacket.

6. JACKET-Fabrics-same as for a gown. A jacket is a dressier form of shortgown. They have set-in sleeves, are more fitted, and usually made from finer fabrics. The jacket can have a stomacher or be pinned or sewed together in the front. If sewed together, this is done after putting the jacket on.

7. BED JACKET-Fabrics- same as for petticoat. These were a common garment worn, not to bed, but around the home as a working garment.

8. GOWN-Fabrics-all of the above. Gowns were the most commonly worn garment for women. There are several different styles. Styles differ based on the date, as well. It is always better to wear an earlier style garment rather than later (i.e: if your period is 1780, you can get away with a gown that was fashionable in 1750, but NOT one from 1790). Older women were also known to continue wearing the fashions that they were most comfortable with from their youth. It would be appropriate for an older woman to wear a garment that pre-dated her time period by up to several decades. The word, ‘gown’, to the modern ear, indicates something fancy but that was not the case in the 18th century. A gown was simply a style of garment. It was the fabric used and its’ construction that made the gown plain or fancy. To achieve the proper shape for the 18th century, a gown MUST be worn with stays (see below). A gown worn with modern underpinnings does not fit right and will not look ‘period’, even to the untrained eye.

9. CAPS- Fabrics-fine white linen is the best, white cotton can be used. All females of all ages and stages in life wore caps, including while wearing hats.. Colored silk ribbon was often worn around the brim of the cap and tied in a bow. The hair needs to be pulled up and out of sight. Bangs need to be tucked up neatly under the edge of the cap. There are many styles to choose from. One style to totally avoid is the so called “mob cap”( a circle of fabric with a drawstring or elastic reaching around the head). This is a MODERN style of a Colonial cap. There is a period cap called a ‘mob cap’, but it looks nothing like the modern cap just referred to. Check with an experienced group member if you have questions.

10. STRAW HAT- Women often wore straw hats over their caps when in public or working outside. The hats can be decorated with ribbon and flowers. The hat is worn flat on the head, not drawn down on the sides with ribbon. To hold a hat on the head with ribbon, attach the ribbon to the inside of the crown and tie under chin or behind head. Hat pins were also common for holding the hat on the head.

12. JUMPS OR STAYS- Fabrics- strong linen or fustian. Avoid fancy prints and colors. Stays were worn over the shift and under the gown or jacket. Stays were considered undergarments and generally were not seen. However, while at home during hot weather, some women did remove their outer garments and work in stays. Stays can be expensive if you buy them from someone else, but are the main underpinning for women and they are the only way to achieve a proper 18th century shape. It is best to have stays custom fitted to your body so that they will be comfortable. Poorly fitting stays can be very uncomfortable. There are many resources available that explain how to make your own. Check with an experienced group member for more information. The best modern adaptation for those who either can’t or won’t wear stays is a sports bra. If you must choose this option, make sure to wear one that won’t show under your 18th century clothing.

13. NECKERCHIEFS AND APRONS-Fabrics- linen, cotton silk, wool. Neckerchiefs can be made of woven plaids, stripes, or checks, but the most used color was white. Be sure to buy a woven check, plaid or stripe, and not a print.

14. POCKET- Pockets can be plain linen, an appropriate print or check, pieced, and embroidered. Pockets were worn under the petticoat and were accessible thru the side slits in the petticoat. They were not seen, no matter how fancy they were.

15. SHOES- Shoes are not just an accessory. They are just as important as the rest of your clothing. Appropriate reproduction shoes are a big investment. There are several companies that make some good reproductions. Check with some veterans in the group to find out the best ones. Here are some guidelines for “cheater shoes”: Shoes should have a period look. Buy plain-toed, black, low-heeled shoes. Replace laces with narrow grosgrain ribbon. For lace-up shoes, the holes should be plain with no metal grommets. Buckle shoes found in most modern stores are almost always the wrong style. Avoid ridges and obviously rubber soles. Try to find leather or imitation leather for the upper shoe and leather or another hard sole substitute for the soles.

Please be aware that some of these patterns do not have very good instructions or illustrations. With some of them, you need to have a basic understanding of how clothing fit the body in the 18th century. The one with the best instructions is Kannick’s Korner. However, some of her patterns only have instructions for the item being made totally by hand. If in doubt, always ask one of the above women.