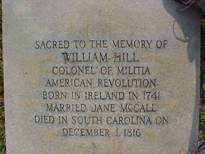 From an article by Gary Young, published in the December 1999 issue of the York County Genealogical & Historical Society. P. 5

“In the New Acquisition being the first and only one ever erected in the State of South Carolina, is now in blast, and if no unforeseen accident happens, will so continue, at least 12 months, in which time may be had, by wholesale or retail, Bar and Ploughshare Iron, Smiths and Forge Anvils and Hammers, Salt Pans, Pots of all sizes, Kettles both for kitchen and camp, Skillets, Dutch Ovens, Sad Irons, Spice Mortars, Waggon, Cart and Truck Boxes, Stoves, Andirons, Swivel Guns, and Cahorns, of any size, 2, 3 or 4 pounders, with balls to suit, with any sized Cannon Ball or any other casting in iron. Apply on the spot to William Hill, or in Charleston to Isaac Hayne.

One hundred working NEGROES are wanted to hire, for whom good wages will be given, the more men and fewer children in the gang the better, no situation in the State is more healthty [sic] and secure from an enemy. Apply as above.”

Gazette of the State of South Carolina , Charleston , 24 November 177 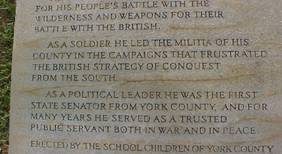 “It is really melancholy to see the desolate condition of Mr. (Col.) Hill’s plantation in the New Acquisition; All his fine ironworks, mills, dwelling houses and buildings of every kind, even his Negro houses, reduced to ashes; and his wife and children in a little log hut. I was shocked to see the rugged, shabby condition of our brave and virtuous men, who would not remain in the power of the enemy, but have taken to arms.”

“Col. Wm. Hill—was about 5 feet 9 in hight a thin spare made man rather a round face large nose and spoke slowly.”

“Col. Wm. Hill, of York Co. S.C.—Gen. McMackin?? Knew him from his boyhood, having been raised within two miles of Hill’s ironworks. He was about five feet, ten inches—spare built.

Before the war he had imported a fine horse named Flein Nass??, which became a great favorite with him. Hill was a blacksmith—made his own spurs, and mounted Flein Nass for the war.

Hanging Rock—In this fight, Col. Hill was shot under the shoulder blade, and the blood spirted out—seeing which, the surgeon said—“let me take you off the field—you cannot long survive—and had better be where you will not be run over.” “If I die, I’ll die upon Flein Nass,” said the wounded Colonel, and putting spurs to his horse dashed from one end of his regiment to the other, encouraging the men—explaining in his sonorous voice, through his nose—“fight on, my brave boys—I’m mortally wounded.” He kept in the saddle till after the action and carried the lead in him to the grave.

“His moulder was an Irishman named Calhoun who was caught by the British and hung to make him tell where Col. Hill was, but Calhoun was true to his employer and did not betray him. The British burned the building and left Calhoun hanging, who was cut down and restored to life by a very faithful Negro of Hill’s who had witnessed the whole proceedings from his place of concealment. Calhoun was of the same stock of J.C. Calhoun. I was well acquainted with two of Col. Hill’s sons John and Alexander Hill. Alexander lived to an old age….”

From the Weekly Sun, Rock hill, S.C., Jan.1, 1897 and copied from the Gaffney Ledger of Dec. 10, 1896. The quotation is from a letter written by “W.L” described as an ironworker who recalled William Hill’s ironworks on Allison Creek, a tributary of the Catawba River. Published in York County Genealogical & Historical Society. Dec. 1997. P. 24

September 1786, William Hill of York County, New Acquisition, to Joseph Atkinson and Daniel Bourdeaux both of Charleston, 4350 pounds, nineteen tracts: (1) ½ of tract on the south side of Catawba River on Crowders and Ellison’s Creek below the lower little mountain, granted to Robert Patrick 28 March 1755 and bequeathed by will 10 September 1776 to James Patrick and conveyed by him to Wm. Hill 24 October 1783, 600 acres, (2) ½ of a tract on the south side of Crowders Creek joining James Dougherty, Joseph Bradner, William Patrick, 195 acres granted to Alexander Curry 15 May 1772, conveyed by him to Wm. Hill 8 November 1783, (3) ½ of the tract on Ellison’s creek joining William Steuart, 270 acres, part of a grant….

I love you guys but I’m not typing all 19 descriptions. As you see Col. Hill owned lots o property.

York county deed book B. P.177-193. Published in The Bulletin of the Genealogical Society Of Old Tryon County, Inc. P.55.

York County Deed Book B. P.165, #74. Published in The Bulletin of The Genealogical Society Of Old Tryon County, Inc. P.55

“19 May 1789, William Hill of York County, Camden District, S.C…. whereas I became bond to Daniel Bourdeaux of Charleston for 8210 pounds conditioned for payment of 2105 pounds to Bourdeaux…. I do mortgage to Bourdeaux my half share in 87 negroes who “ heretofore have been and now are employed at the AEra Iron Works and at the Etna Furnace and farms in York County” as securement of payment…

York County Deed Book B. P.150 #66 Published in The Bulletin of The Genealogical Society Of Old Tryon County, Inc. P. 54

“19 May 1789, William Hill of York Co. etc. part of all those works for the manufactory of cast and bar iron known & distinguished by the name of the Era Iron Works in York Co….. which consists of the Era and Etna Furnaces, a steel furnace, a forge with four fires, a cupola with all the various improvements….lands….12000 acres, for the full term of 500 years…..

York County Deed Book B. P.152 #67 Published in The Bulletin of The Genealogical Society of Old Tryon County, Inc. P. 54

In 1786, the State of South Carolina was just beginning to get its governmental house in order. The County of York had been established the year before and five judges had been appointed: Col. William Bratton, John Drennan, David Leech, James Wilson and Col. William Hill. The body of men began to devise a system of price controls, for taverns and Inns located in the bounds of York County. It was “Ordered by the court that the following rates and no others shall be taken by tavern keepers in York County for the following year.” The top legal prices were:

Good pasture for a horse, 3 pence

The following letter was written by Colonel William Hill in 1815. In it he shares with the readers his fears that the history of the Revolution has not been recorded accurately and that General Sumter and himself were being left out. It is Colonel Hill’s claim that he alone was the one who planned the assault on King’s Mountain. This information is from Lyman Draper’s research on the Revolution in the south.

THE AUTHOR TO THE READER

For near—-30 years I have been waiting with hopes that some person—fully qualified both in abilities, and knowledge of facts would have undertaken, to rectify some great mistakes, that have been made by the historians who have wrote on the Revolution in So. Car. Charity will oblige me to suppose that the misrepresentations that have been made was owning to correct information being wanted and had by design, but what ever was the cause the fact is, that great misrepresentations have been made, and one in particular of the action at Kings mountain this state, and as the result of that battle was one grand link in the great chain of providence and of events that broke the plans of the enemy to hold the southern states, as British provinces it ought to be handed down to posterity and more especially as we are now engaged in war [war of 1812], to support our independence—- it is the design of the author to rectify the mistakes that have unhappily been made, and I do declare—to the readers that it is not from any peculiar motive or design to be known as a historian as I am conscious I am not qualified for the task—I can relate facts (which I know of any uncertain knowledge) in the naked dress of truth and it hath so happened that there is not now alive any other person that can write so fully of so many facts as I can and as no other that hath the same knowledge hath undertaken the task I have with reluctance taken it upon myself—–

It will be seen that general Sumpter who had the merit of being the first general officer that made any opposition to the enemy after the fall of Charleston. They having overrun the country and all So. Car. Had submitted to their powers except the part called the New Acquisition now York District—that the gen—Sumpter was prevented from being with the party at Kings Mountain. And having there the chief command that he was necessarily absent by reason of the treacherous conduct of an officer that is the only one of So. Car. That is named by the historians,[Col. James Williams, killed at King’s Mt.] and at the same time the only officer that was instrumental to bring about that great event is not mentioned, [Col. William Hill, the author of this work] and although it is disagreeable to state facts that may hurt the character of the ———– or wound the feelings of the living yet it is to ———-of the historians and the only duty?? Of the living if there friends have acted improperly is for them not to follow their example that the present generation may copy after the laudable example of their forefathers— and make use of all the means which god and nature hath given them—and to hold that independence purchased so dearly by their fathers—and have a proper trust in that power who governs the affairs of nations is the prayer and wish of the author

A letter from Col. Hill to Mr. Miller, concerning an unpaid bill presented to Col. Hill from Mr. Thompson, Blacksmith, for services rendered during the Revolution. Mr. Miller was the manager or agent on the project to open the Catawba River to navigation, ending at a point some thirty miles from Hill’s Ironworks. This information is from Lyman Drapers research on the Revolution in the south.

The bearer Mr. Thompson hath a demand on the old company that was a det —–by verdrey?? Of a contract that I have with a blacksmith that I hyered in behalf of the company whilst I had the engagement of the business at Rocky mount and Col. Senth hath given some endorsement of wrighting to syd Thompson but it is mislaid or lost however I hope the books will show what sume [sum] is due—I will be much obliged to you sir if you will enform me what ———- I shall take to have my concerns in the old company books setled [settled] and I likewise enform you that if you stand in need of any thing in my way I will supply you with pleasure as I am a grate friend to the undertaking of the work you are engaged in and however unfortnatly it hath ——- succeed I hope it will be completed and I consider myself much interested in it and I was one of the first that give it a move 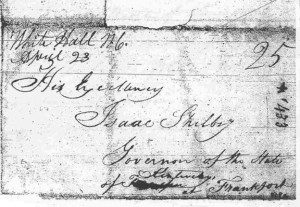 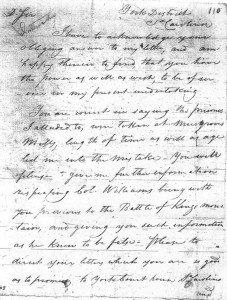